{Click on any photo to view the full size image}

Today's Ride started out as a NCTRF Ride, but I decided to invite the NorCal VROC folks.
There were four VROCers. NiteLite, Makini and two members of both VROC and NCTRF, me and Phil T. In total we had 10 bikes including one guest of Eric B riding a Harley.

And we had a pleasant surprise at the start point in Dixon. Lockup formerly known as David J. stopped by to say Hi. David is a brand new Correctional Officer who is working long hours up in Susanville. His home is still in Woodland, but he had to get back to work later this afternoon. 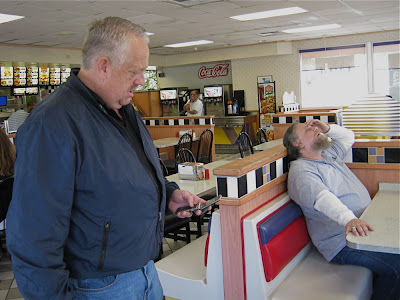 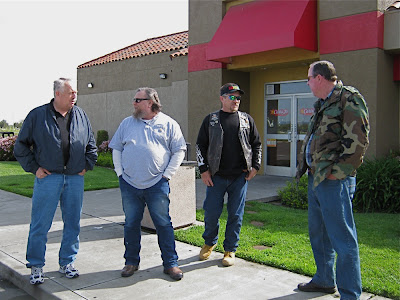 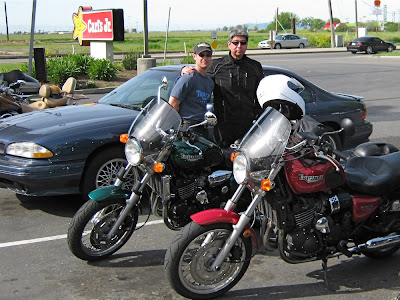 
The weather is perfect cool and partly cloudy. The first nice road we ride is new to all but Makini. It is Cantelow Road in Vacaville. 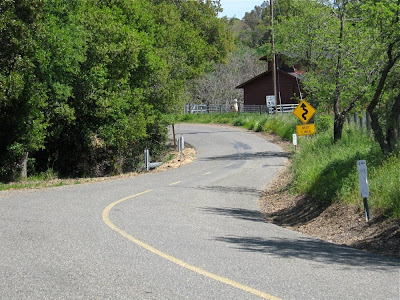 This is the wide part of the road 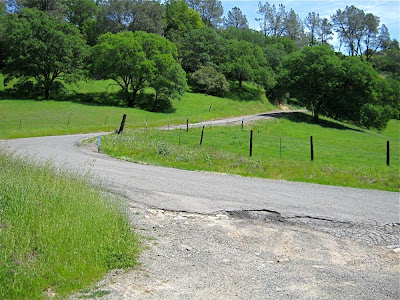 Too bad it is only 5 miles long, but four of those miles look like this

Then we head north on Pleasants Valley Road to Hwy 128 to The Corners. The General Store is closed again. 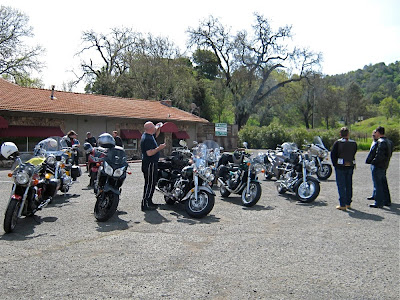 Well there are well watered bushes behind the building now 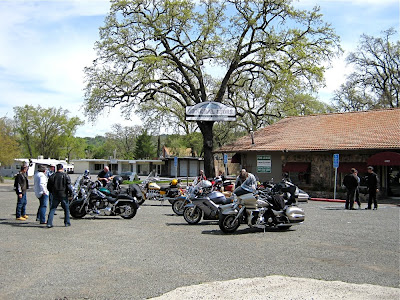 At least there is a big parking lot 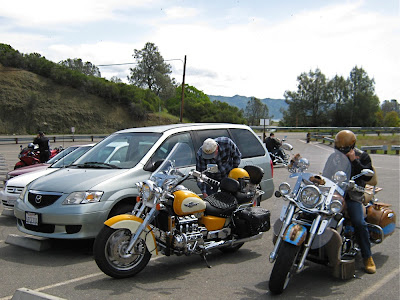 Stan decided to ride his Valk with the bald front tire today rather than his Triumph. And Makini's distinctive Vulcan. 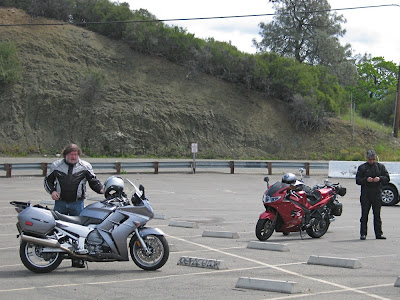 Tom P. was late as usual, but not the last one today and Jess is checking his cell phone. 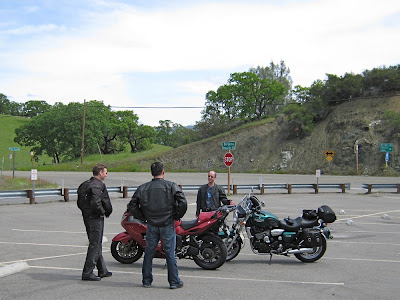 Pdub, Eric's friend from work and Eric B 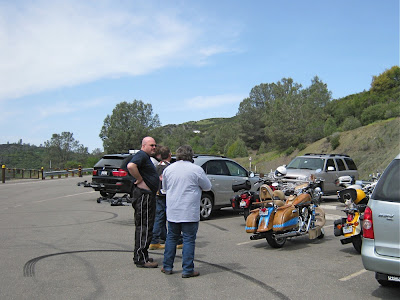 We continue to Pope's Valley then to Angwin and along Silverado Trail to Buster's Southern BBQ.
Now the Ride gets a bit confused. As I ride through the parking lot the tables are full and there is a long line waiting to order. So I decide to continue the Ride and eat in Glenn Ellen. But ......

Anyway NiteLite and I are the ones that continue the Ride Route.

I have only ridden Brush Creek Road in Santa Rosa a few times, but the homes up on the hills continue to amaze me in their opulence. Brush Creek Road goes through a residential neighborhood but much of it is along Brush Creek and the road is very rustic and a thorough fare.

NiteLite and I decide not to eat at Glen Ellen and head into Sonoma to eat at the Black Bear Diner, instead. 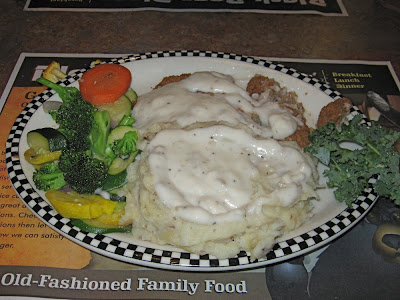 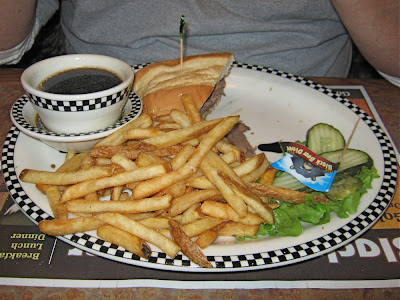 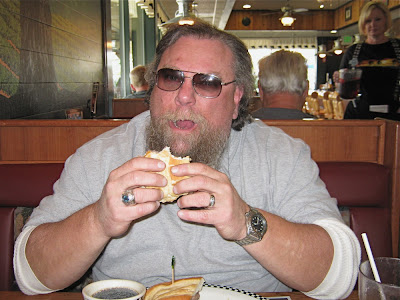 Getting ready to take a bite 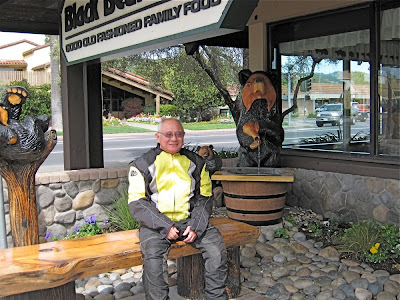 NiteLite and I part company since he is heading west back home and I am headed east.

I gas up across the street and said "I may as well make the last two stops on the Ride Route". So I head over toward the Chocolate Cow. As I turn into the parking lot entrance I notice that Phil's Nomad, Pdub's V-Strom and Jess' Sprint are parked on the street just at the entrance. 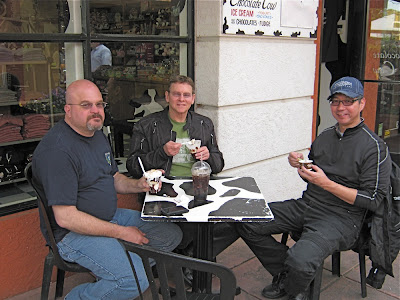 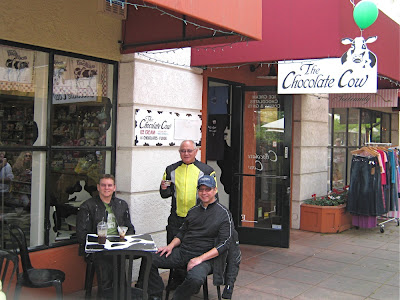 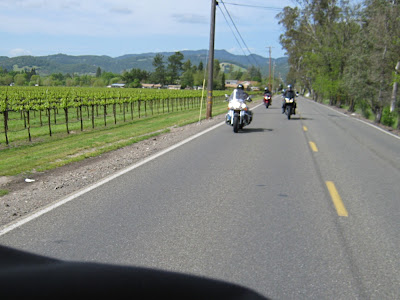 The scheduled end point of the Ride was the Jelly Belly Factory. So I stopped there as the other three continued along I-80 back to Sacramento. 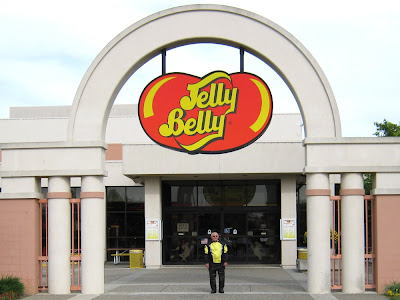 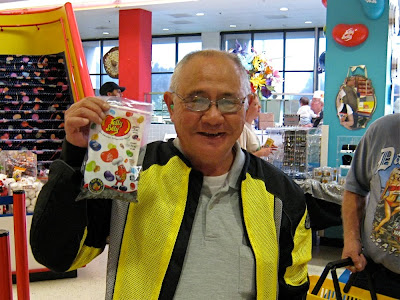 This one is for Cranky. Six dollars worth of licorice Jelly Bellys. {I had the cashier take this photo :-) }