{Underlined items are links to more info. Click on them opens a new browser window. Clicking on a photo will open a larger version, use Back button to return.}

This was suppose to be the "Bierkan Ride", but his class changed schedule and they held a Saturday class. So he was unable to make his Ride.

Then Manjo and Lil Doc extended their visit a few days to make this Ride, but Lil Doc's trike needed some transmission repair which was not completed in time for them to make the Ride either, oh well.

Next Ride anywhere near Sonoma I have to check and see if there is a big event happening at the Infineon Raceway. This weekend there was the FRAM Autolite NHRA Nationals. The traffic was horrendous. But more on that later.

Pdub led the Sacramento NorCal Triumph Riders and Friends contingent to the Jelly Belly. Makini, Phil and Don H. rode on their own as did I. 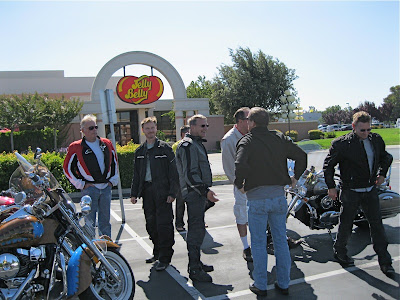 Notice that Stan is dressed in shorts and a light jacket. He froze his tail off on the ride in from Sacramento. Ron also was so cold that he went into the Jelly Belly and bought a sweat shirt.

The Delta Breeze was in full force this morning and the temps were in the low 60's with a 25 mph head/cross wind.

Anyway, since we were going to ride quite a few miles along Tomales Bay barely sheltered from the Pacific Ocean, Stan became a "no starter". As the Ride headed west on Hwy 12, he headed east and back home.

That's Hwy 12 in the background. 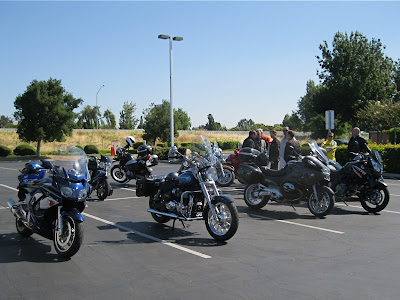 An eclectic group of bikes

Pdub insisted that I post his Wee Strom with its new accouterments. 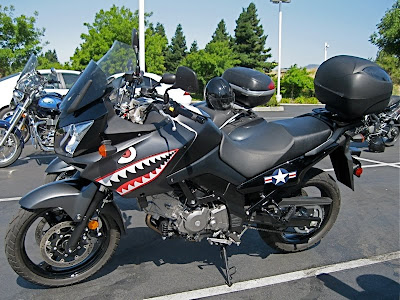 For the start of the ride through Jameson Canyon Road and around the south end of Napa the traffic was normal, which means it is always heavy but moving. The route plan was to take Hwy 121 to Hwy 37.

I rounded the curve where Hwy 12 turns north to Sonoma and saw the "parking lot" in front of me. Since we were still 10 miles from Hwy 37 it became a no brainer to reroute the Ride. {a map of our actual route is at the bottom of this Blog}

A gas stop in Novato where I was hoping to see Lil Doc and Manjo, but Lil Doc had her telephone ringer off and we never got messages.

We rode from Novato to the Marin French Cheese Company. 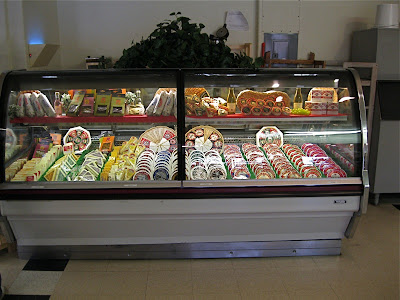 Some of the cheeses in the display case 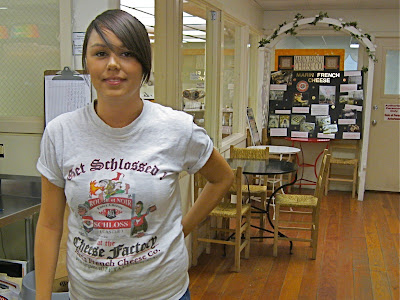 
Ron had other obligations so bought a sandwich and a salad for lunch. He would head back home from here. Two down, so we are now a seven bike group. 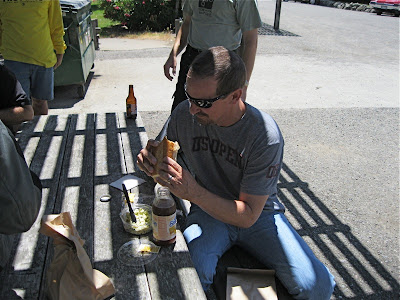 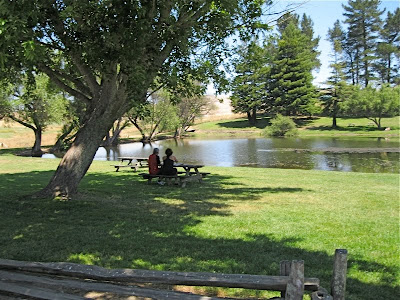 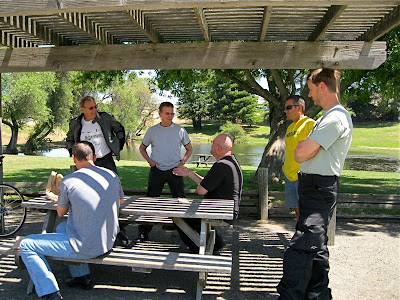 
We continue the Ride to Hwy 1 just north of Point Reyes Station and continue along Tomales Bay. It is really cool, sunny and crisp weather. The traffic is not real heavy.

We turn inland and ride to Freestone and Wild Flour Bread to buy some goodies. 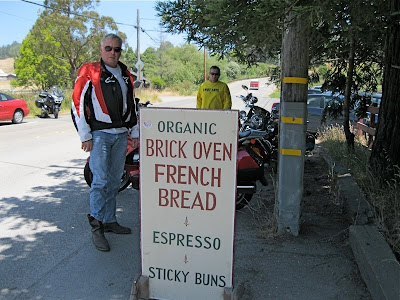 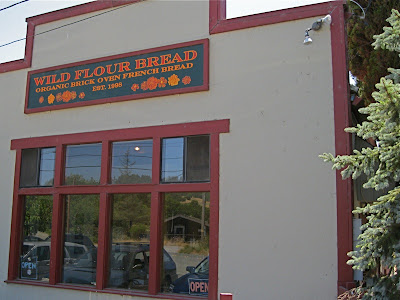 The roadside wall of their building 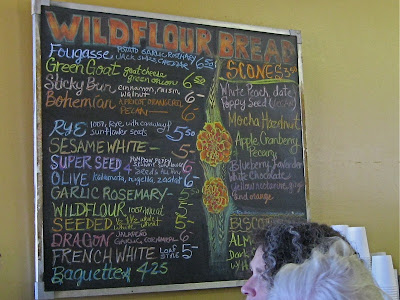 The "menu" which changes a little daily 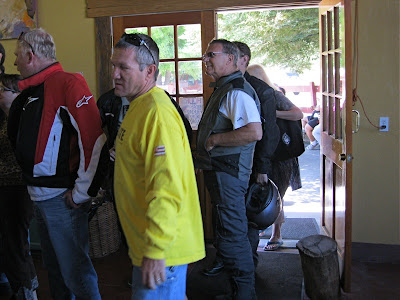 
Then only three and a half miles north on the Bohemian Highway is the village of Occidental and Negri's our lunch stop. 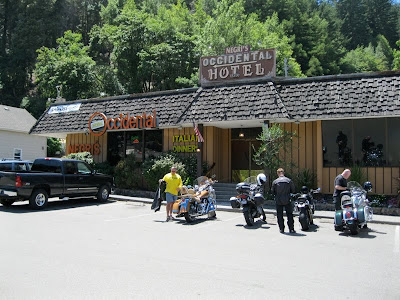 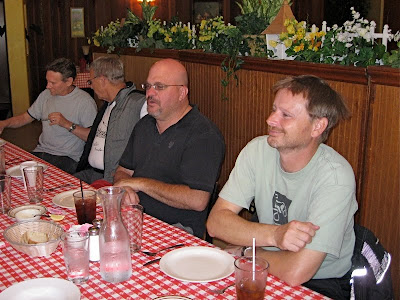 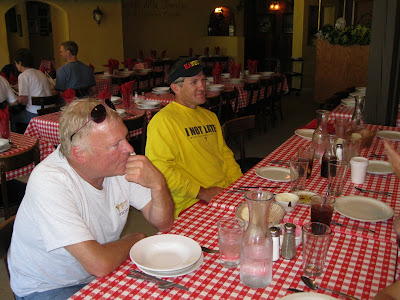 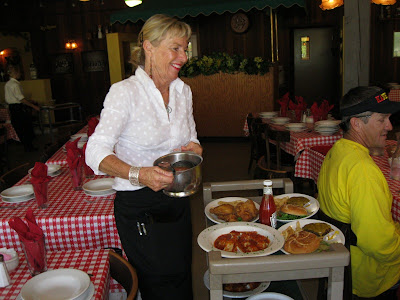 Our waitress who forgot to order Pdub's lunch and left Peter's glass of wine at the bar for 10 minutes. She was not too good. 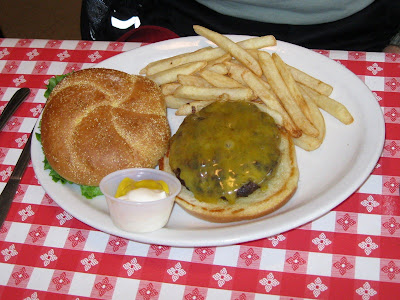 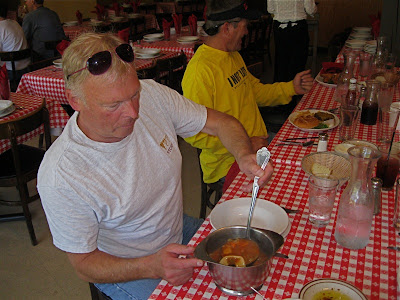 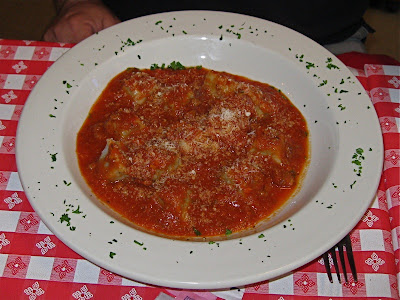 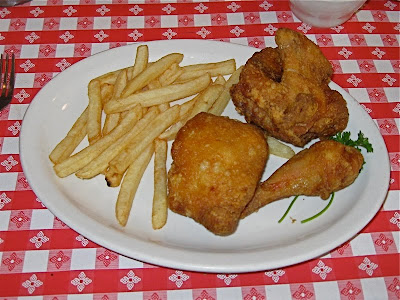 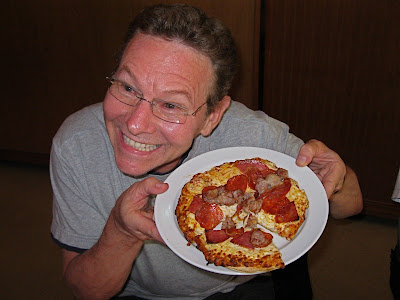 
After lunch we lose Steve as he has a brother who lives just a few miles from Occidental. Now we are a group of six.

I decide to change the route from Coleman Valley Road and we just head north on the Bohemian Highway to Monte Rio and Hwy 116. We follow Hwy 116 for many miles along the Russian River and through the redwoods and the vineyards.

Just before Cotati we take Stony Point Road to Railroad Avenue to Old Adobe Road back to Sonoma and the Chocolate Cow. 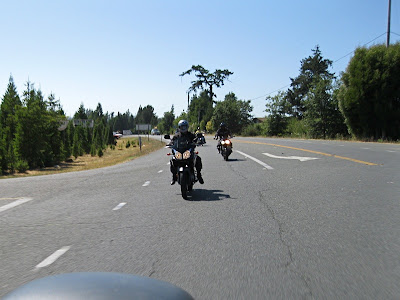 
We get to the Town Square of Sonoma and is it crowded. The weather is in the high 80's and sunny.

I love this little Town Square besides the Chocolate Cow there are bakeries, the Sonoma Cheese Factory and Cafes. Also there is the old Courthouse surrounded by a nice park. 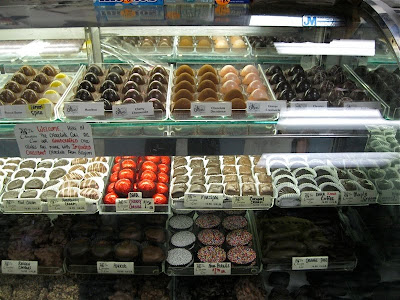 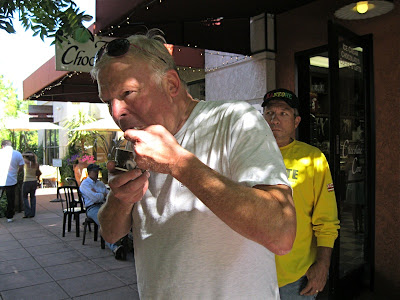 Peter has the Vanilla Gelato 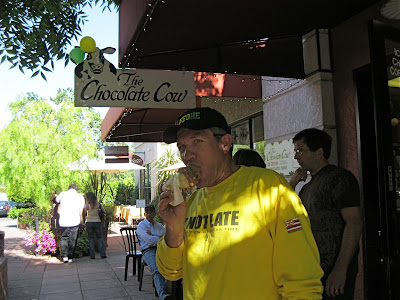 Makini has an ice cream cone 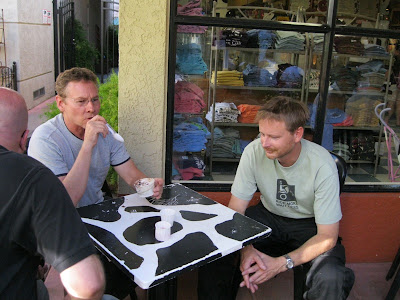 Makini has a son who lives in Sonoma so there are five of us headed back to I-80 and home.
As we get back to Hwy 12 from Napa-Sonoma Road I see a "parking lot". Luckily there is a Passing Lane which allows us to lane split for a nice long stretch. So we had about a 10 minute delay over a normal traffic day in getting to I-80.

It was a beautiful day and a good ride, except for the traffic.

Here is the actual ride route. But you will have to click on the View Larger Map at the bottom as there are too many variations to display on this embedded map.